Imphal, Mar 10: The Election results for 690 assembly constituencies in five states — Uttar Pradesh, Punjab, Uttarakhand, Manipur, and Goa — will be declared on Thursday. A total of 18,29,22,674 voters participated in the seven-phase elections that started on February 10. The assembly election 2022 has been a heated affair, especially in UP and Punjab due to the farmers’ protests over three laws that lasted for over a year, ending only in December 2021.

Here is the update of Manipur Assembly Election results:

NPP Leads in Chingai, Wangoi Constituencies: Here’s a list of constituencies where the respective parties are leading:

The ruling BJP coalition government in Manipur has touched a magical number of 31 seats, as per the latest ECI data. Chief Minister N Biren Singh defeated his nearest Congress rival, P Saratchandra Singh, by 18,271 votes in the Heingang seat.

Historic Surge of BJP across India!

The people of Uttar Pradesh, Uttarakhand, Manipur and Goa have spoken and given a milestone mandate to @BJP4India and PM Shri @narendramodi ji's development policies. #BJPAgain #ElectionResults

Heartiest congratulations Shri @NBirenSingh Ji for leading @BJP4Manipur to a grand victory under your able leadership.

Also congrats to all State party karyakartas for your good work in winning back the trust of people.

Thanks you Manipur for believing in PM @narendramodi Ji. pic.twitter.com/uICH5UculI

#WATCH | Firecrackers being burst at BJP office in Imphal, celebrating the party's performance in #ManipurElections pic.twitter.com/xHAeseqOv9

#WATCH | Celebrations at the residence of Manipur CM N Biren Singh in Imphal as BJP leads in the state as per official EC trends. CM N Biren Singh leading in Heingang by 18,271 votes. pic.twitter.com/4AUbchWfAm

#WATCH | Celebrations at the residence of Manipur CM N Biren Singh in Imphal as BJP leads in the state as per official EC trends. CM N Biren Singh leading in Heingang by 18,271 votes. pic.twitter.com/4AUbchWfAm 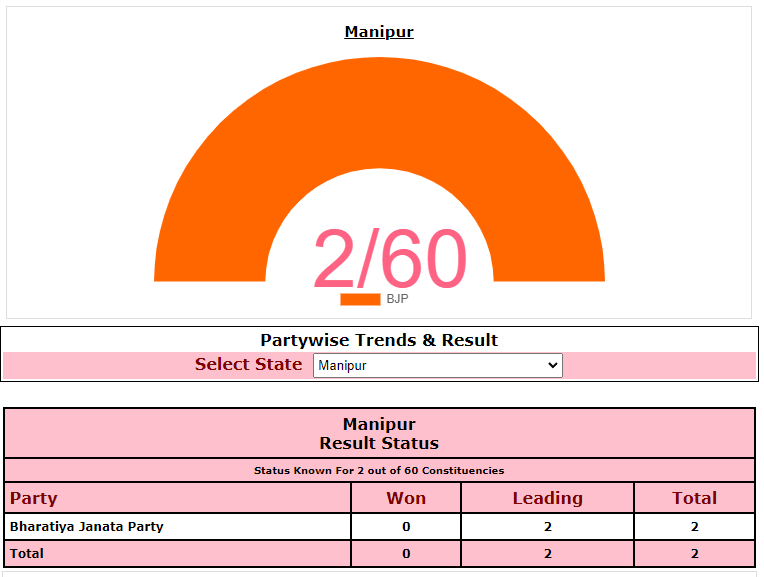 Offered my prayers at Shri Shri Govindaji Temple along with Shri @sambitswaraj Ji to seek the blessings of Lord Govindaji for the grand result that awaits us today.

Let us march towards a peaceful, prosperous and developed Manipur, together with BJP. pic.twitter.com/x0GRdcBSqD

Assam floods: Over 6 lakh affected due to heavy downpour, death...

Unbelievable how earth looks from space at night

Dispute over food in a marriage ceremony of UP’s Bijnor

IMD predicts more rainfall over the northeastern states of Assam and...

IMD predicts rainfall this week, heatwave may abate in the Northeastern...

Weather update: Rains and Thunderstorms on the Cards for Northeast